Return to Stories
Monday, February 27, 2012 — ﻿ ﻿ ﻿Cathay Pacific Airways has taken delivery of a new Boeing 777-300ER that is the first aircraft to feature its Premium Economy Class product and new long-haul Economy Class seats. The aircraft – the airline’s 25th 777-300ER – arrived at Hong Kong International Airport yesterday evening (26 February). At the same, the airline also received its fifth Boeing 747-8F from the manufacturer.

Speaking at the delivery ceremony at the Boeing factory in Seattle, Cathay Pacific Chief Operating Officer Ivan Chu said: “This is an important development for Cathay Pacific – another big step in our commitment to provide outstanding products and services to our passengers. We’re confident that both these new products will be winners, especially when combined with the famous Cathay Pacific service.”

As well as introducing a totally new seat and entertainment system, Cathay Pacific has designed the entire customer experience to be more special for its new Premium Economy Class passengers.

To begin with, the new Premium Economy experience features a quieter, more spacious cabin than the traditional Economy Class with between 26 and 34 seats per aircraft. The seat pitch is 38 inches – six inches more than Economy Class – and the seat itself is wider and has a bigger recline. It has a large meal table, cocktail table, footrest, a 10.6-inch personal television, an in-seat power outlet, a multi-port connector for personal devices and extra personal stowage space.

Complementing these features, passengers will also benefit from:

Additional markets will come online later in the year including Adelaide, Los Angeles, Melbourne and San Francisco in August, Frankfurt in September and Brisbane and Mumbai in October. More continental Europe and long-haul routes will be gradually introduced beyond that.

By end of this year, Cathay Pacific will have 48 aircraft installed with the new product. By the end of 2013, 87 aircraft in the airline’s long-haul fleet will feature Premium Economy.

The new long-haul Economy Class seat features a cradle mechanism to enhance the level of comfort in the recline position, the latest in high-resolution touch-screen personal televisions, a USB outlet and an iPod/iPhone outlet that allows passengers to connect their own mobile devices to view content through the personal television. The seat also offers improved living space and more personal storage space.

Details of the new products can be found in the table below: 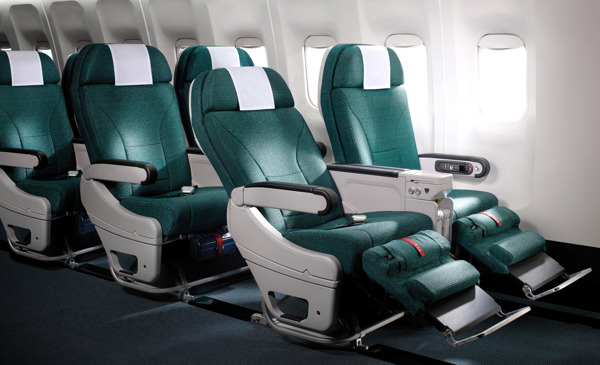