Skip to Content Skip to Content
Return to Stories
Sunday, January 26, 2014 — The Cathay Pacific Spirit of Hong Kong Community Flight 2014 took off from Hong Kong International Airport today, taking more than 160 residents from 69 less-advantaged single-parent families into the skies over the city. The participants had never had the opportunity to fly together with their families before.

The community flight was the airline’s first initiative in support of the “Bless Hong Kong” campaign, launched recently by the Commission on Poverty. The aim was to give these first-time fliers an opportunity to enjoy a unique experience, spend quality time together, and forge lasting memories that will help to strengthen family bonds.

The Honourable C Y Leung, Chief Executive of the Hong Kong Special Administrative Region, was Guest of Honour for the community flight, which was hosted by Cathay Pacific Chief Executive John Slosar.

The flight was operated by a Boeing 777-300ER aircraft carrying Cathay Pacific’s new “Spirit of Hong Kong” livery. The unique livery features the silhouettes of the 110 winners of “The Spirit of Hong Kong” campaign which was launched by the airline in July last year and run in support of the government’s “Hong Kong: Our Home” initiative.

Speaking at the kick-off ceremony, John Slosar said: “It’s great to see everyone here today, and I can assure you that we are delighted that you could be with us! You will all become ambassadors for Hong Kong when you step onboard Cathay Pacific’s third 'Spirit of Hong Kong' aircraft, which features a unique livery that carries the spirit of our home city and its remarkable people around our global network, 365 days a year.

"We have more than 160 family members joining us today. I am very pleased to see that you all uphold the spirit of Hong Kong in your daily lives, as shown in the creative work you submitted to the non-government organisations. I believe that today will be a very special experience which you will be able to share with those closest to you, making it even more special.  So let us all explore the wonders of flight together!" Mr Slosar added.

The flight was made possible by the support extended by various government departments and other organisations, including the Transport and Housing Bureau, the Hong Kong Civil Aviation Department, the Immigration Department, Airport Authority Hong Kong, and the Aviation Security Company Limited.

The airline worked with the Hong Kong Council of Social Service and four non-governmental organisations - Yang Memorial Methodist Social Service, Mong Kok Kai Fong Association Chan Hing, Hong Kong Sheng Kung Hui Lady MacLehose Centre and the Hong Kong Children & Youth Services – to select participants for the community flight. The non-governmental organisations developed their own programmes to encourage creative entries from young people to demonstrate how they and their family members embodied the spirit of Hong Kong. The creative submissions were submitted in different forms – from kite and comic design to writing and photography.

As the aircraft circled above the South China Sea for around 90 minutes, the families were able to try out the seat features and enjoy all the programmes on the inflight entertainment system. While tucking into inflight meals served by Cathay Pacific cabin crew, they also had the opportunity to share some special moments with their families 25,000 feet in the air.  Joining the participants on the flight were about 40 Cathay Pacific Volunteers, members of the airline’s corporate volunteering team, who helped to take care of the guests and share their aviation knowledge with them.

Twelve-year-old Kelly, a first-time flyer, said: “My family rarely has the chance to spend time together, so I am really happy that I can share memorable moments in the air with my mother and younger sister today.”

Second Officer and veteran CX Volunteer Kevin Cheng said: “As a pilot, much of my time inflight is spent in the cockpit. I am really excited to meet the passengers of this community flight, many of whom had never flown before.” 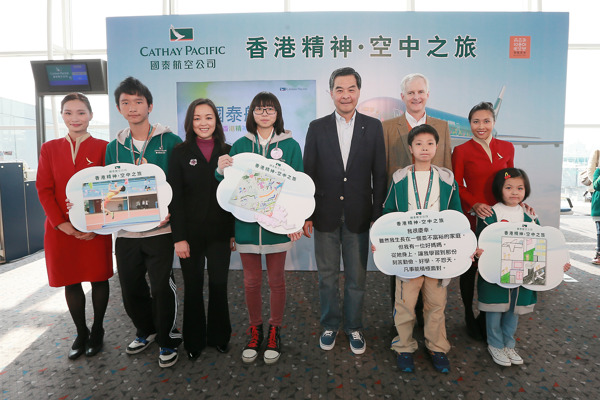 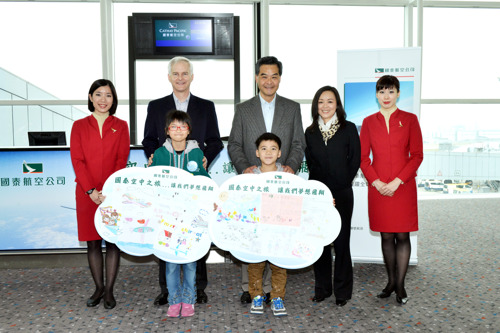 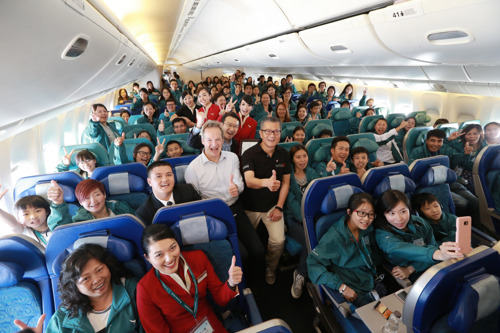 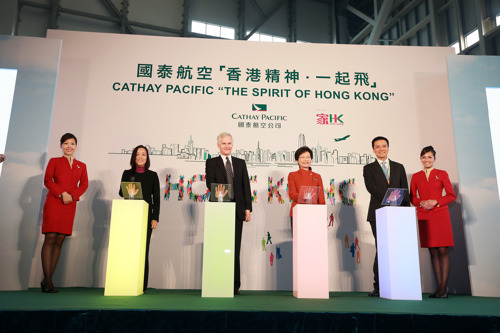