Skip to Content
Quay lại Câu chuyện
Chủ nhật, ngày 21 tháng năm năm 2017 — The Cathay Pacific Community Flight 2017, an accredited event celebrating the 20th anniversary of the establishment of the Hong Kong Special Administrative Region (HKSAR), took off today with some 100 Hong Kong children flying together with their families for the first time.

Mr. Paul Chan, Financial Secretary of the HKSAR, was Guest of Honour at the event, and joined Cathay Pacific Chief Executive Officer Rupert Hogg to accompany the 230 participants on the 90-minute flight over Hong Kong.

Speaking at the pre-flight ceremony, Mr Hogg said: “As the city’s leading home carrier, Cathay Pacific is proud to have grown together with Hong Kong and its people for over seven decades. The theme of this year’s Community Flight is ‘Inspiring Strength through Togetherness’, with the young participants being encouraged to strive together with determination in order to achieve their goals and follow their dreams.”

Cathay Pacific Senior Captain Hank Cheng, who achieved a local aviation milestone last year after completing a round-the-world journey in his homebuilt aircraft, “Inspiration”, commanded today’s flight. The inspirational story of Captain Cheng’s record-setting adventure, which saw him fly over 50,000 km in a near three-month period, echoes the themes of both the Community Flight and that of the anniversary celebration – “Together • Progress • Opportunity".

Flight participants were selected through a writing competition organised by the Hong Kong Council of Social Service to demonstrate how they had successfully overcome life challenges. Among those chosen was Liang Ying-xin, whose perseverance after sustaining a serious leg injury proved to be an inspiration to many.

“As a lover of sport, it was a huge personal setback when I hurt my knee – at first, I couldn’t walk properly and was forced to give up playing volleyball, a game I love,” said the 17-year-old. “But with the unfailing support of my family, I am proud to stand up on my feet again and channel my energy into a new hobby. I am very happy to join today’s flight with my family and have been very excited and inspired by the stories of so many of the other participants.”

Joining the participants onboard the Boeing 777-300 aircraft were more than 60 Cathay Pacific Volunteers, including cockpit and cabin crew who acted as Community Flight ambassadors, providing assistance and sharing their aviation knowledge and fun facts with the families. 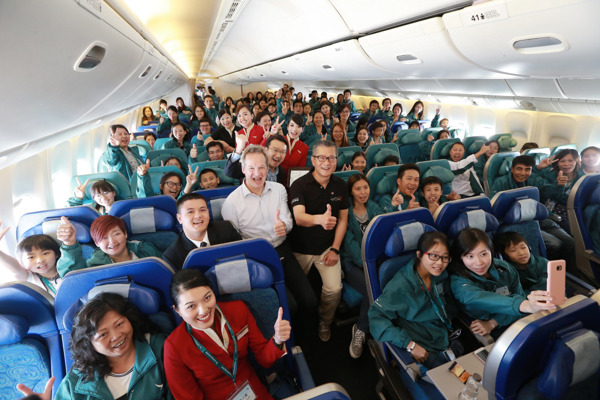